In search of the Rare and Elusive Salmon Bean Soup

My husband is allergic to shellfish. And so is his sister. And so was his grandmother. So you can imagine that not much shellfish is served in our house. The frustrating part is that all of them developed the allergy in their teen years, so they remember the awesome taste of lobster and crab and in particular a hearty bowl of clam chowder.

So, I am on a constant mission to find substitutes for clam chowder.

After a stop to the Chowder House in Portland, Maine, for example, I worked tirelessly to perfect my own version of a shellfish-free, cream-based fish chowder.

We had also fallen in love with a White Bean Salmon Chowder the Whole Foods Market made and sold back near the fish counter. However, we noticed a year or so ago that we never saw it anymore. Finally, I asked some folks at our store. No one really knew what I was talking about; no one seemed to remember the chowder. Then finally one guy thought he remembered them getting it pre-made from a company called 'Sea Bear'.


So, armed with this information, I sat down to type.

First, I wrote to Whole Foods, asking them about the chowder.

At the same time, I located Sea Bear's website and also wrote to them: 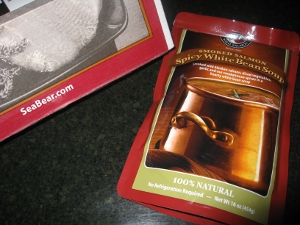 In a world of rotten customer service, I wanted to give a shout-out to both Whole Foods and Sea Bear. They both went above and beyond to help me on my quest, even though it was not at all certain that such help would result in any type of sale. I'm left with a nice warm feeling -- not unlike that feeling that a good, hot, chowder leaves behind -- after my interactions with both of them. Can't wait to do business with them, again.
Posted by The Nitpicky Consumer on Thursday, April 14, 2011

Email ThisBlogThis!Share to TwitterShare to FacebookShare to Pinterest
Labels: food

Not 10 minutes ago I finished my small container of Whole Foods Salmon and White Bean soup. I then immediately googled it for more info when I came across your post here. The good news is, it's still out there! The bad, I'm not sure how close you are to Washington DC but if you wanted to contact a Whole Foods that has the soup you're looking for in-house RIGHT THIS SECOND, they're located on Wisconsin Ave in NW D.C.

We also have it here in NJ!