I'd been hoping that my son's elementary school would do a full-school art project, and this year my dreams came true. The art teachers decided to do a project using craft sticks. Every child would paint a craft stick, and these sticks would then be put together into an art piece and hung. Sounds easy, huh? Well, it wasn't as easy as we thought, but the result looks great. This post is so that other schools/parents can learn from our trial and error!!

The art teachers used craft sticks (aka tongue depressors) for this activity.

The teachers cleverly taped the sticks to paper, so that the kids had a personal work surface that prevented the sticks from sliding, prevented mess, and made the sticks easy to dry on the racks. Each child painted their stick using craft swab(s) -- like a one-ended q-tip with a longer wooden handle. 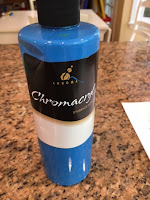 They used acrylic paint -- specifically Chromacryl --  and the
teachers gave them some tips on color theory, pattern, and texture beforehand. (Mixing of 'muddy' colors was discouraged, but inevitable especially in the younger grades.) Words and images were not allowed as subject matter, to make the sticks more uniform and prevent potential content issues.

Two art teachers and 3 moms gathered to talk about the logistics of assembling the sticks together into a coherent piece of artwork: 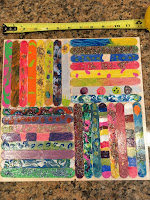 We needed to 'sell' the idea to school administration, and also to plan our approach. So we started work on 2 pieces: a concept panel and a virtual mockup of the final product.

We decided as a group that plywood might be the way to go as our foundation, so one mom got a small piece of it, made some sample sticks with her kids, and created a proof-of-concept panel.

We then took photos of the proposed space - a bland stairwell - and mocked up what it would look like using pixlr.


Here's the math in a nutshell: 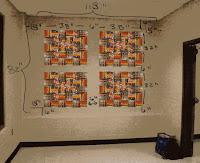 This was the most time-consuming part.

Plywood comes in 2'x4' and 4'x8' panels, so we had to get the bigger size and get it cut to the sizes we needed.  We used 1/4" thickness plywood to keep down the weight.
[It took a long, long time to get help at Home Depot to cut the plywood panels. Plan HOURS for this. If the math works out, it would be ideal to be able to use one of their 'precut' panels of 2'x4', but that size just didn't work for our space and our concept]

The wood panels looked a little rough, so we sanded the edges and then painted them a blue acrylic color, which would look nice on the cement walls. (TIP: put weights on the panels after painting them to prevent warping.) 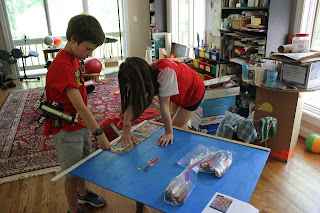 First, lay out the sticks.


My son and a neighbor's daughter did this for my panel. Their 'job' was to make sure that the colors and patterns were randomly distributed. We didn't want one square of all rainbow sticks and one of all greenish-brown sticks.


Then, it was time to glue the sticks on with wood glue. 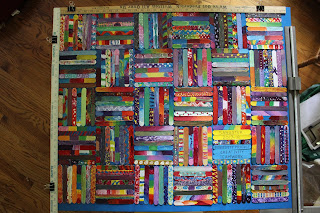 This process took several days because it was key to line up the sticks properly and then weight them to prevent warping.


I had great success binder-clipping 2 yard sticks to the panel to use as guides in lining up the first squares.


Then I worked on one 8-stick square at a time. 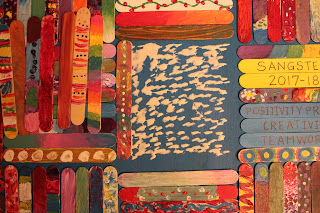 Either way, it was critical to make sure that the sticks were lined up and not overlapping. 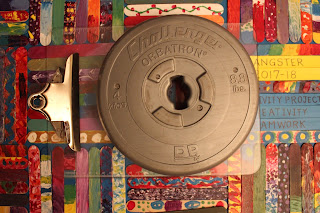 Then I used a plastic clipboard and weight to weigh down each square. I used plastic so that if a little glue got on it, it was easy to pry it off.


I let each square dry for at least an hour before going to the next square. We worked from top left to bottom right, like a puzzle.

We used Mod Podge to create a varnish-like coat. We really poured it on; the goal was to fill up all those holes between the sticks, so they'd be more secure and dust-resistant. 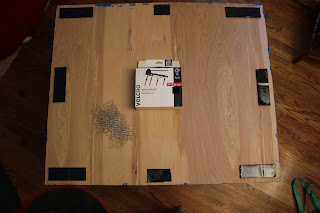 Each panel, with sticks/glue/mod-podge, ended up weighing about 9 lbs. Being below 10 lbs allowed us to use industrial strength Velcro as a hanging option.

The hanging took longer than we thought.
Originally we thought we could easily do this in an hour, but it took 3 of us over 2 hours to measure the wall, mark the wall, double-check the marks, peel Velcro, and stick the panels.

End Result: A Masterpiece of Sticks

We are super proud of how this turned out! Total cost of supplies to make the panels, not including paint/sticks/brushes (which were part of the school's art budget): about $120 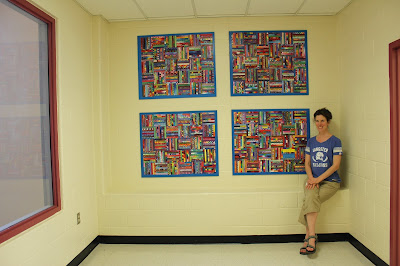 Posted by The Nitpicky Consumer on Saturday, June 02, 2018


So meeting with a Russian Call Girls in Jaipur is now not remaining a dream, beauty or their sexy attitude, now these all features you can found in Our Agency, and you can fulfill all of your dreams and desires. Our escort service agency provides you the youngest, sexy and hot. Check our other services...
Hi Profile Escorts in Jaipur
Foreigner Call Girls in Faridabad
Russian Call Girls in Rishikesh