Fireplace Reflectors should be Fire Resistant, don't you think?

We live in a newer townhome, with a fireplace that has an 'insert'. [This is an odd thing for my husband and I, who grew up in older homes where the fireplace was simply the fireplace. The brick you saw was what was there.] The back of this insert was starting to crumble. We talked to our chimney guy this past fall about this, and he said we had 2 options:
We opted for Option 2, duh.

So, my hubby patched up the fireplace. Great. So now we needed a reflector.

However, for most of November, the item said 'Out of stock'. We called Thanksgiving week and were told it was probably discontinued, so my parents ordered the other reflector P&H was carrying at that point, which was a little cheaper and Made in China (sigh). 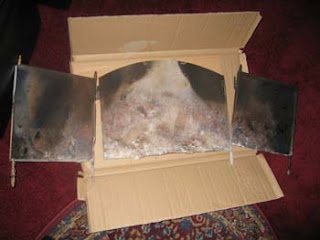 We started to use it after Christmas and in just a little more than a month of use in our fireplace, it disintegrated. Literally. The hinges melted and it warped like a big metal potato chip in the back of our fireplace.

I contacted P&H at that point, noting that the FireBrite Reflector was now available again and the Chinese one was no longer being advertised. (Hmmmm).

The folks at Plow & Hearth were great. They contacted me back, we discussed the issue, I returned the old one and they sent me the other one in its place. They paid all shipping; all we had to do was pay the difference between the two reflectors, which was of course totally fair. 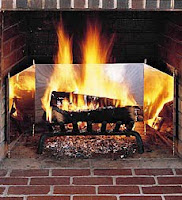 We're past fire season now, but we'll soon have our new FireBrite assembled and ready to go for next year's fire season. Thanks, Plow & Hearth! Thumbs-up for standing behind your products.
Posted by The Nitpicky Consumer on Sunday, April 11, 2010

Email ThisBlogThis!Share to TwitterShare to FacebookShare to Pinterest
Labels: home, internet shopping, Made in USA

I do think you're right that fire reflectors should be fire resistant. And it's also important to get good chimney cleaners for your fireplace to avoid emergencies.