Why do some people assume that 'Free' means 'Garbage'?

We have a very old sofa. It is not in the best of shape, but it isn't ready to be trashed, either. It is the style that the back is made up of a series of pillows, so while the couch frame itself has been in the garage the past few months, we've been using the pillows in various other parts of the house.

My housing association was sponsoring a community-garage-sale this past weekend, so I decided it was time to find a new home for the sofa. Maybe someone just out of college with no furniture and no money. (The way my husband was when he first bought it.)

So, I rounded up the pillows and we put the couch out in the driveway. I thought about asking $5 for it, but really all I wanted was to find it a new home and be rid of it. If this didn't work, I would try Craig's List or Freecycle. And if THOSE didn't work, we'd pay to have the frame disposed of and keep using the pillows in other parts of the house. 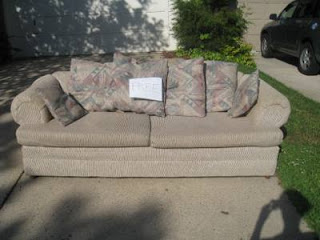 I then went back into the house to make breakfast. I glanced out the window every now and then to check on what was happening, and within about 15 minutes, a man was standing there inspecting the couch.

Great, I thought. He seemed very interested, so I started to walk out and see if I could answer any questions. I think he saw the movement through the window. Quick as a flash he snatched up the pillows, stuffed them into his car, jumped into the drivers seat, and sped off.

And there sat the remains of our sofa. With the 'Free' sign stuck to the back of it. 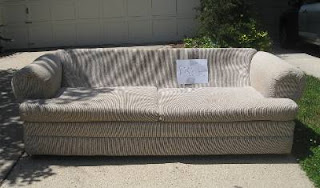 My jaw dropped. For the first minute I was so shocked I couldn't even think. Then I was furious. FURIOUS. Absolutely RAGING MAD. Over the next hour, I rotated from being angry at myself (for being an idiot), angry at this man (for being a jerk), and angry at People in General (for no particular reason). Just to rub salt in the wound, a young man stopped by about an hour later and sadly noted that he would have gladly taken the sofa ... had it still had cushions.

Now that I am able to think more rationally about this, I find it an interesting pattern that people like a bargain, but if the price becomes too low (or Free) they tend to either:

1) Be suspicious of it. (Why is it this cheap? What is wrong with it? What is the catch?)
or
2) Take advantage of it (Treat it with disrespect, become greedy, forget that they are getting something for nothing)

I saw this a lot when I was working retail. When the inventory sale prices became insane (e.g., a $150 sweater for $9.99), shoppers would treat the items with complete and utter disdain. I remember watching a woman recklessly plow through the sale pile, literally throwing unwanted items over her shoulder into a pile on the floor. Were those items on sale? Yes. But were they hers to treat in such a negligent fashion? No.


PS: Anyone want a sofa without cushions?
Posted by The Nitpicky Consumer on Wednesday, May 19, 2010

Wow, what a jerk. It's things like that that make me want to carry around a paintball gun at all times. Marked and injured. Huzzah!

I heart Freecycle and CL. We know the awesome of teh free. Like the awesome outfits I can do with the box of clothes (in really great condition and appropriate for my age), that I got for free.

But I digress, at yard sales especially, people are wary of teh free. If you want something to go, and would give it for free, make it super cheap, like five dollars and watch people marvel over the amazing deal they got. (And you have five dollars to treat yourself with.)