The Royal Wedding: Should we care? Yes.

Yes, I got up and watched the Royal Wedding of William and Catherine this past Friday. I also TIVO'd it on two channels -- CBS for the American coverage and PBS for the British coverage -- so I could watch it more in-depth later. 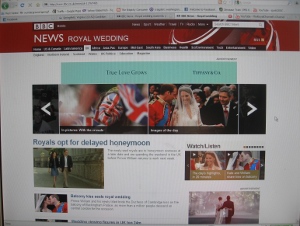 It was breathtaking. I almost cried when the camera panned down from the ceiling of the Abbey during the procession. Some of my friends were just as excited as I was, such as my friend Christine who baked English scones the day before and sent one over to me.

But many other friends just didn't 'get it'

"Why would you get up so early just to see a wedding?" one asked.  Another, a bit disgusted at the coverage, wondered "With so many horrible things going on, why are people caring about this?" Still others were barely aware it was happening.

So I found myself wondering, why did I care so much? Why was this so special? I've come up with three key reasons:


A chance to see living history

The BBC coverage was better than a history lesson. It provided a crash-course in British political, religious, cultural, and art history for the past thousand years in the 'pre-show' hour. Some of the facts about Westminster Abbey were fascinating. And I loved the way one historian described the progress of royal weddings from the pre-arranged 'mergers and acquisitions' hundreds of years ago to the vibrant public spectacles they have become in the last century.

I showed segments of the broadcast to my 3-year old son. He jumped with glee to see the Abbey's bells, from inside the tower. (We've watched that 10-second clip over and over more than his favorite episode of Dinosaur Train, and that is saying a lot.) He loved the royal trumpeters, who heralded the Queen's entry into the Abbey. He was mesmerized by the boy choir. He proclaimed "Look at that big church!" when Westminster Abbey was shown in his entirety. And he cheered when the "big plane and the little planes" flew over the Palace. These images got him really excited; he understood that something big and important was happening and he loved it.

A reminder of the importance of family heritage

My mother's side of the family is very in touch with our history. We still run the Rosebud Perfume Company; we still have pieces of my great-grandfather's drugstore from the late 1800s. As my cousin, who is in her late 80s, said last year "We are so blessed to know our roots and our family history. Some people today seem so lost; they don't know who they are or where they came from."

The Royal Family is a reminder of how precious and wonderful such a history can be. The ability to trace back, to see signatures of great-great-great grandparents, to walk where they walked.  They are the ultimate in family heritage preservation. It's not everyone who has the means to preserve a 110-year-old family carriage, but they do and they have. It's a treasure to be able to glimpse such heirlooms not in a museum, but actually cared for and in use by the same family, generations later.


Some good news, for a change

We're so used to the Media covering bad news, that we almost feel guilty when they cover something good. But quite frankly, news is by definition neither good nor bad. It's news. And it's good for us all to share in something positive.

David Starkey, a Royal Historian who did commentary for CBS, stated it very well:


"It [the wedding] really has caught the imagination. This is a bit of a grim time. We've had recession. We've got declining incomes. People want a bit of fun. Monarchy is brilliant at creating fun and entertainment. So many of the people I saw and listened to [on the street on the way here] were American, clearly coming back home in a funny kind of way and watching the royal family that -perhaps rather controversially - you got rid of."

I generally despise the media, but in this case, I found their coverage wonderful. Kudos to all the press teams who worked very hard to pull together commentary, history and coverage that would highlight all aspects of this fabulous event.

Besides the witty commentary by Royal Historian David Starkey, other highlights for me included BBC television's broadcast of the space station crew sending their best wishes
and designer David Emanuel's breathless commentary upon catching the first glimpse of Kate's dress as she emerged from her hotel. (He designed Princess Diana's dress.) It's infectious to experience someone who really knows their craft and can share that knowledge and excitement.

Thank you for sharing it with us.
Posted by The Nitpicky Consumer on Sunday, May 01, 2011

Tanya, I think you are right on 'target' with your views. I have friends who claim to LOVE history....and yet wanted no part of watching the wedding. How can this be?
Evelyn